a. Monitoring and predicting natural disasters:

Characterizing the surface and weather conditions that can lead to flooding is often difficult due to a lack of ground-based information available to monitor or forecast flood events (particularly in developing countries). To fill some of these data gaps, scientists and forecasters often rely on satellite sources as inputs to hydrologic models that can predict where the water will likely flow once it hits the ground. While the majority of flood models currently focus on local or regional scales (taking into account one drainage basin or watershed) some recent research has shifted to estimating areas of potential flooding on a global scale.

Example 1 - Floods: The Global Flood Monitoring System (GFMS) is a NASA-funded experimental system that uses real-time satellite precipitation data as part of their flood monitoring and prediction tools. The model combines the satellite precipitation data with a hydrologic model, which includes information about the types of soil, soil moisture, vegetation, slopes, rivers, and streams as well as other factors that affect whether an area will flood. The end product is a series of estimates describing potential flooding conditions that are produced every three hours around the world. Data can be accessed through the Global Flood Monitoring System. Starting with the 1/8th degree resolution maps, users can "zoom in" to regional areas, change which parameter to view, time sequence the maps over the last few days or months, and select a latitude/longitude location and plot time sequences of data at a point. Once sufficiently "zoomed in"(~10° latitude window is recommended) on the 1/8th degree maps, one can select from the 1 km resolution parameters (streamflow, water storage,inundation map) for a high resolution view of the regional basin. Time sequences at this high resolution of the map can be viewed and time series at a point can also be plotted by clicking the mouse at the location. The global flood potential map can also be accessed through https://pmm.nasa.gov/precip-apps, where users can select the global flood layer in addition to rainfall accumulations from 30 minutes to 7 days.

GPM data is used by the Global Flood Monitoring System (GFMS) to detect potential flooding conditions and estimate intensity. This system also uses GEOS-5 precipitation forecast to estimate streamflow within affected areas. Top left shows the 7-day GPM rainfall totals over California ending on 21 Feb. 2017. Middle left plot shows forecasted 3-day rainfall from the GEOS-5 model near the Oroville Dam area. Bottom left plot shows the forecasted flood detection/intensity for 22 Feb. 2017, forecasts over northern California are estimated to be over 200 mm for the 22 Feb. 2017 (bottom). This information is valuable for improving situational awareness of floods. This capability can be applied anywhere globally, especially where conventional data and methods are not available.

Example 2 - Fires: The Fire Weather Index System is the most widely used fire danger rating system in the world. The Global Fire WEather Database (GFWED) https://data.giss.nasa.gov/impacts/gfwed/ developed at NASA GISS integrates different weather factors influencing the likelihood of a vegetation fire starting and spreading. Calculations require measurements of temperature, relative humidity, wind speed, daily snow-depth, and precipitation totaled over the previous 24 hours. GPM data, along with other satellite, gauge-based, and model products are incorporated in different versions of the GFWED and are used by fire management agencies around the world. This data is open to the public and can provide improved situational awareness of potential fire danger around the world.

Example 3 - Landslides: A global landslide nowcast model provides situational awareness of landslide hazards for a wide range of users. The model uses GPM near real-time rainfall data with a global susceptibility map (available here: https://pmm.nasa.gov/applications/global-landslide-model) to identify locations with landslide potential. This model is updated every 30 minutes and the data is accessible via Applications Programming Interface at and interactive map at https://pmm.nasa.gov/precip-apps. NASA landslide susceptibility, hazard, and rainfall data are available globally in near real-time and have been used by many international and domestic organizations, such as the World Bank, World Food Programme, Pacific Disaster Center, FEMA, and the US Army Corps of Engineers.

1-day GPM IMERG rainfall accumulation (left) for the U.S. West Coast and corresponding landslide nowcasts (right) are shown for Feb. 21st, 2017. Results are updated every 30 minutes and data is available at https://pmm.nasa.gov/precip-apps. Hurricane Matthew affecting Nassau in the Bahamas as a Category 4 storm on 10/6/2016. Malaria outbreaks after the 2010 floods in Pakistan; E. coli and coliform outbreaks from raw sewage in Mississippi flood waters; and cholera spread by heavy rains in Cameroon, West Africa are among the many health hazards associated with flood disasters and torrential rains. In developing regions with limited or vulnerable clean water infrastructure and health resources, any improvements that increase the lead time for warning systems can make a huge difference in protecting the public. Using satellite data to forecast disease outbreaks is an emerging field.

Example 2 - Cholera Forecasting: Work is being done to estimate the risk of cholera after major triggering events, such as storms, by bringing together satellite precipitation data with air temperature anomalies and population to compute maps of estimated cholera risk. One example is shown for Haiti following the passage of Hurricane Matthew 1-2 October, 2016. The goal of this work is to provide improved situational awareness of potential cholera outbreaks before and after potential events. For more information on this work, please contact Antar Jutla (Antarpreet.jutla@mail.wvu.edu).

Remotely sensed precipitation estimates play a key role in monitoring and modeling efforts for organizations that track food and water security, like the Famine Early Warning Systems Network (FEWSNET). In addition to the amount and distribution of seasonal rainfall, the timing of the onset of rainfall is an important variable for early estimation of growing season outcomes like crop yield. With their global coverage, satellites can also observe the results of natural disasters such as short- and long-term droughts, floods, and persistent or deficient snow cover that can each affect agricultural productivity. Satellite precipitation estimates from GPM, combined with other environmental datasets, are used to determine the extent and availability of surface rainfall over farm and ranch land within the U.S. Air Force Weather Agency’s AGRicultural METeorology (AGRMET) model. AGRMET analyzes and forecasts rain and snow estimates to use within hydrologic models. Data from NASA’s Soil Moisture Active Passive (SMAP) mission (and other satellite sensors) can provide additional information on how much water is in the soil, which is useful for assessing drought and flood conditions, and estimating groundwater supplies

Example 1 International Agricultural Forecasting: The International Production Assessment Division (IPAD) is the agricultural forecasting division of the Office of Global Analysis (OGA) within the U.S. Department of Agriculture’s (USDA) Foreign Agricultural Service (FAS). IPAD is responsible for providing monthly global crop estimates and projected crop yields to monitor global crop conditions and ensure agricultural economic security. The USDA FAS is working with NASA and other satellite products to improve agricultural productivity forecasting system through providing NASA products, tools and information. Through this effort, the USDA FAS is implementing enhanced surface and root-zone soil moisture products in order to yield improvements in their crop forecasting system. The application of satellite-based soil moisture estimates from the Soil Moisture Ocean Salinity (SMOS) mission into the FAS soil moisture model provides significant improvements to vegetation forecasting skill in several areas of the world, particularly areas lacking adequate rain gauge coverage required to characterize rainfall inputs into a soil water balance model. Since the move to operations in spring of 2014, the USDA FAS has demonstrated improvements in their crop monitoring and forecasting ability after applying the new satellite-based product, particularly in sparsely-instrumented countries with moderate-to-severe food security issues. The system is now being adapted to integrate observations from the NASA Soil Moisture Active Passive (SMAP) mission.

This image show a screen capture of 10 day average surface soil moisture products posted on the USDA Foreign Agricultural Service (FAS) Crop Explorer website (http://www.pecad.fas.usda.gov/cropexplorer/) for early-November, 2015 (11/01/2015 - 11/10/2015). The image on the top left shows the AFWA precipitation used to generate the model only run shown in the top right plot. The poor precipitation data quality over the region results in limited spatial variability when applied to the USDA FAS soil moisture model. The figure below has improved spatial heterogeneity from the integration of near-real time soil moisture observations from the Soil Moisture Ocean Salinity (SMOS) mission, which were assimilated into the USDA FAS forecasting system soil moisture model using a 1-D Ensemble Kalman Filter (EnKF). 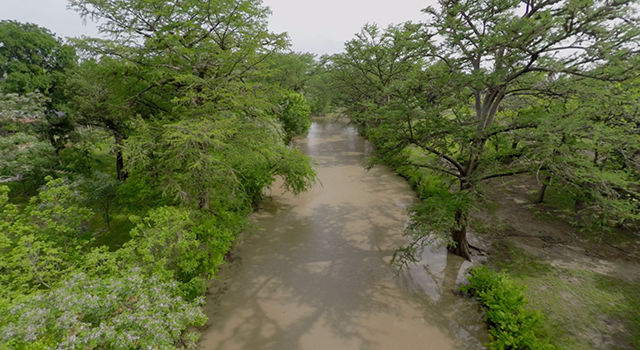